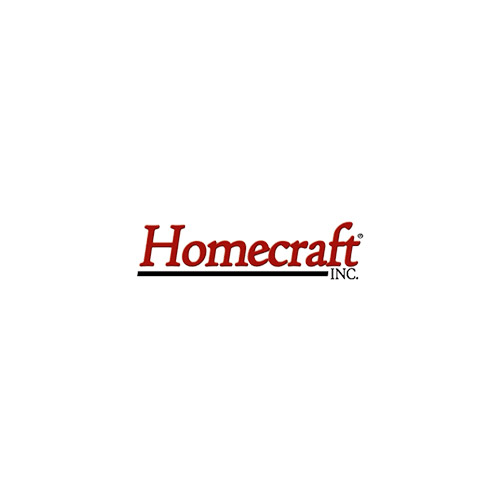 State organizations advocating safety in the workplace pool their resources yet again to mount a nationwide campaign for the prevention of falls in construction sites. The National Institute for Occupational Safety and Health (NIOSH), the CPWR-Center for Construction Research and Training, and the Occupational Safety and Health Administration (OSHA) will be leading the federally-funded effort to cover all US construction firms, including major Delaware roofing companies. The initiative was re-launched amid persistent reports that falls remain the top cause of injuries and fatalities in small residential construction sites.

Just like in 2012, when it was introduced, the national campaign for falls prevention will focus on raising awareness among construction industry movers, shakers, and insiders. Workers and employers will be provided information on safety and reminded time and again about the importance of protective gear while on the job. State safety watchdogs have strongly suggested harness-wearing and the use of retractable anchorage systems and lifelines (among others), particularly among more vulnerable employees like roofers who work at heights.

“Too many times we hear the phrase, ‘it was an accident.’ We know these incidents are preventable, which means that hundreds of fall-related deaths and thousands of injuries can be prevented. Our years of data collection consistently show that falls constitute one-third of all construction fatalities, which makes falls the leading killer of construction workers,” explained CPWR executive director Pete Stafford.

For his part, assistant secretary of labor for occupational safety and health Dr. David Michaels said construction activity has increased over the years because of economic growth. The downside of this is the influx of workers that are not up to the task and do not have the necessary skills and experience for it. He believes seasoned Delaware roofing contractors and other construction owners in other states could change such grim statistics.

“Falls are the leading cause of death in construction so it is vitally important for employers to provide the right equipment and properly train their workers in a language they understand so they can do their jobs safely. Falls can be prevented and lives can be saved by planning ahead to get the job done safely,” Michael reiterated.

For companies involved in construction like Homecraft Inc., the renewal of the fall prevention initiative is always a welcome development in the industry. After all, as important as the projects such companies take are, the lives of their workers are even more so.

The tables have turned; it is now the homeowners’ turn to rate the Better Business Bureau (BBB). Their verdict: BBB is doing a good job in its advocacy of promoting ethical business behaviors and practices in the United States and Canada. The level of trust being accorded the non-profit institution is relatively high that people pull up information from its website before making a decision about which contractor or builder to hire.

According to a Build Zoom survey, BBB is considered one of the top consumer methods by those planning to renovate roofing in Delaware or other parts of their residential properties. Remodeling projects may involve sprucing up any part of the home. The poll’s close to 600 respondents were asked to rank eight methods—in terms of trustworthiness and authority—in determining which ventures stand out for scrupulous business ways within their own industries.[…] Read More

The Bowne House in Queens, NY, is undergoing a major restoration project. The Queens Tribune reported that the work on the 17th-century house started on April 1, 2013 and is estimated to finish in June 2014 at a cost of $3.2 million. The renovations will involve installing new shutters and doors along with steel columns, fixing the drainage system, restoring the old sidings, and putting extra reinforcement on the ground floor.

A home improvement company that lands a contract for restoring a historic house may be sitting on a potentially good project to add to its resume. Newark, Delaware itself has a lot of them, having been founded by Scottish and Irish-Welsh settlers in the 1690s, and has an education circuit that eventually produced some of the Declaration of Independence’s architects. Although some historical houses within the 12-Mile Circle may not be as old as the Bowne House, siding contractors in Newark, DE like Homecraft Inc. can still come in and make a difference.[…] Read More

The damaged Dover Free Public Library in Dover, NJ, may soon have a new lease in life. Town Administrator William Close said in an interview with The Daily Record that a roofer can be hired for a repair job within days and the entire project itself, which includes insulation and rewiring, will be finished after six weeks at the latest. The library was closed down after a storm slammed into the area on July 7, 2013, and left a hole on the roof 30 feet long by 50 feet wide.

Although Dover is situated deep in New Jersey, homes in Wilmington, Delaware are just as vulnerable to the same woes that befell the Dover Free Public Library. The city has moderate precipitation all year long, capped with deeply cool winters, humid summers, and snowstorms of differing ferocity – all despite being located near the mouth of the Delaware River and the Atlantic coast in general. The damage to the library can make specialists at roofing in Wilmington, DE, such as Homecraft Inc., take notice when they are tasked with emergency repair work. 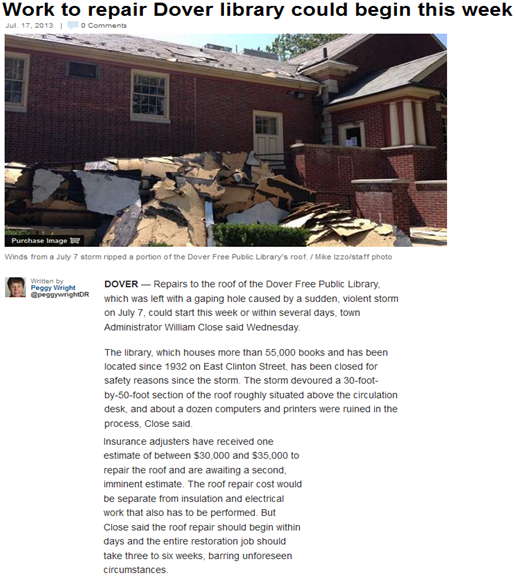 It is a given that homeowners and building operators, whose properties were ravaged by storms, must wait until the storm has passed before coming out to look at the damage. They could either assess it themselves or seek assistance from a reputable contractor; if the latter option is pursued, inspectors can be on the scene to properly itemize any issues and patch it up before more thorough work can be performed. In the Dover Free Public Library’s case, reports stated that the roofing that covered the gap was sheared to one side of the building, with some water damage reported in the periodicals section.

Any occupied structure will have an insurance policy in place that the owner can use to finance the repair assignment and sync it with the estimated quote. For the Library’s roof repair job, the Record reported that insurance adjusters were given one estimate of between $30,000 to $55,000 while another estimate was being drawn up; quotes for the insulation and the rewiring were not available at press time.

The library has been standing since 1902. Library director Mary Romance said the roof repair is the main priority at the moment. A roofing contractor tasked with a repair job can come in, do the necessary work, and wrap up everything as soon as possible – something the official was optimistic about.

There are houses in Delaware that may be just as big as the Dover Free Public Library and gashes of the same size will leave the occupants in great peril. Therefore, it is imperative that a Newark DE roofing company that places premiums on quality service like Homecraft Inc. be enlisted for the repair job right away.

Doors offered by Homecraft Inc. are among the most durable and secure in the market; steel-reinforced locks and frame, among a few others. Reinforced deadbolts can make the difference between a safe home and one prone to forced entry, and for good reason. Deadbolts are among the prime targets for thieves forcing their way inside a house. As Janelle MacDonald of Wave 3 News reports, the type of locks in place matters.

A deadbolt is a type of lock that consists of a latch and a cylinder locking mechanism, in which the only way in or out is to turn the cylinder to retract the latch. Deadbolts have been touted for their resilience, given that they keep the door shut more firmly than traditional knobs. A lot of deadbolts, especially the low-priced ones, are prone to damage as a result of forced entry. Deadbolts in West Chester, PA doors should tell thieves that these doors won’t go down without a fight.[…] Read More

The demand for doors and windows goes hand-in-hand with the demand for new housing. If builders are having a hard time keeping up with the renewed demand for new homes, as Bloomberg’s Shobhana Chandra reports, window and door manufacturers have their work cut out for them. The housing industry wants nothing short of quality doors and windows for West Chester, PA homes and in other areas; after all, as experts see it, the market’s close to returning to pre-recession levels.

Despite the struggle, builders see this as a good thing because it will keep them busy for a long period and earn a fortune. Before the big slump, single-family homes that were yet to be built comprised 47 percent of the housing market. When 2006 came around, however, demand took a nosedive until late 2008, where these homes only comprised 14 percent. Now, the market is growing ever closer to regaining stability prior to the slump with 36 percent.[…] Read More

Replacement windows with high performance glass can protect your furniture from fading. Keeping your curtains closed is no longer the only option to protect expensive couches and rugs! Let there be light!

Just had our roof replaced by Homecraft® Inc. We had 4 other quotes but we chose them because of the materials they used. Also the price was right where we expected. The crew went above and beyond our expectations. They were very courteous, and had the job done in a day and a half. I am so satisfied that I am now going to get my windows replaced by them.

The experience was great. Completely satisfied with the process, from ordering to installation. Everyone I was involved with was professional, friendly and helpful. Homecraft® Inc. installed my porch enclosure a few years ago and did a wonderful job. Windows are next on my list and again will use Homecraft® Inc.

We requested quotes from 5 companies and Homecraft Inc.was the most responsive - pleasant & thorough (our estimator asked us more questions and took more interest in what we wanted, than anyone else did). The first day of the job (is was two day job) the foreman was due there at 7:30AM - he arrived at 7:28AM - was extremely friendly & courteous & explained what they would be doing and asked if I had any questions - SUPER professional! The 2nd day was more of the same - they finished when they said they would - did exactly what...

It was great. Homecraft® Inc. did a totally professional job and I love my new windows. I especially appreciated Konrad, the salesman, who has always been honest and absolutely not pushy. He respects the customer’s time and doesn’t stay for nearly 2 hours, like another window salesman did. The other guy tried a high pressure routine, but not Konrad. We trust Homecraft® Inc.!

Interviewed a half dozen companies to replace ten windows, two doors and two storm doors. Most were some combination of high pressure or low quality. Homecraft® Inc. provided high quality installed windows at a very competitive price. There were no "if you sign today" or "this price is only good today" type of deals. The sales person was very professional and left us materials to make our decision. The installation looks terrific and the installers removed all materials. We would highly recommend Homecraft® Inc.

Your home’s makeover begins with a phone call to (302) 798-0302 or quick and easy form submission to request a free estimate.

Our home design experts are ready to discuss your hopes and dreams, and partner with you to make them a beautiful reality. We’re with you from start to finish and promise to make the entire experience easy and enjoyable.

Don’t wait another minute to get the transformation underway! Get in touch today.